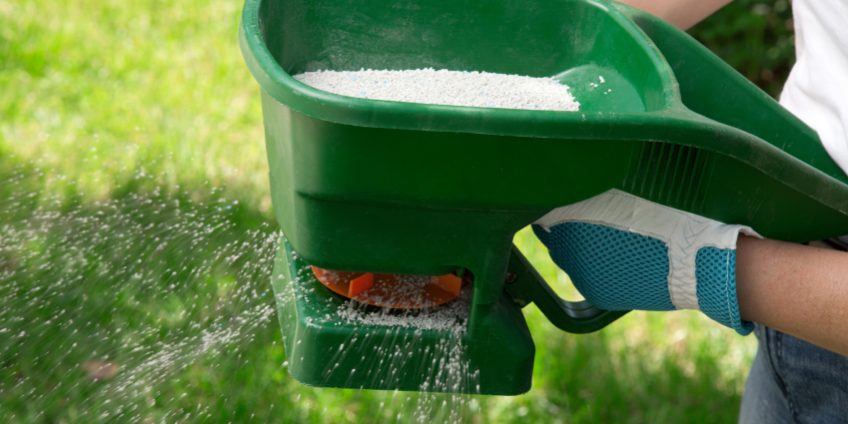 It’s been a rainy June in Calgary and many landscaping companies are struggling to keep up during the short periods between storms. It’s been tough for both professional and personal gardeners to sneak in a proper spring clean up during the short amount of time our green spaces have been dry, and now the grass is growing very quickly due to all the moisture. But it doesn’t mean you should skip your annual aerating and fertilizing regimen for the year if you haven’t managed to get to it thus far. And don’t let you commercial landscaping company skip the process either. It’s integral for the long-term health of your grass.

With the short growing season in Calgary, we have to get crafty, and so it’s not uncommon to break the “regular rules of gardening” up here. The only time it’s too late to aerate and fertilize is when the grass has stopped growing, so don’t be afraid to schedule a maintenance appointment with Mirage now.

Aerating a lawn does exactly what it sounds like. Aerators basically use knives or punches to puncture the soil of your lawn and introduce air to the root system of the grass to promote new growth. Aerating is especially important for soils with higher compaction characteristics (as they are up here in Canada, where the ground is literally frozen for half the year), and for other soils such as clays or rocky substrates that easily produce “hard” ground. Compaction can also be the result of high foot traffic, which is very common in commercial areas.

Typically, aerating takes place in April or September, but as happened this year, aeration had to wait for a lot of people. The key to aerating is to do it when the soil is moist but not too soggy so that the plugs removed from the soil are easily cut and then knocked from the tool or the knives are able to leave behind a permanent slice. Without sufficient moisture, aerators cannot easily penetrate the soil, and if it is too wet, the tool will get easily clogged.

Grass, like all green growing plants, fixes nitrogen with the aid of microorganisms, absorbs carbon dioxide, and “exhales” oxygen. Nitrogen fixation happens at the roots and aeration helps to feed this vial nutrient directly to the root system. The oxygen introduced hastens the decay of thatch, which is the dead grass clippings and other organic debris that settle after mowing. Some thatch is beneficial to the lawn by protecting the roots and retaining moisture, but if it gets about a half inch or over thick, it acts as a sponge, a fungi habitat, and prevents water from actually getting to the roots of the grass.

Aerating also allows water to get directly to the roots of the grass. The deeper that water can penetrate the soil, the more deep root development in the grass is promoted and the less useless water run-off is produced. Watering becomes more efficient and grass becomes more drought resistant too, something that may come into play later on this summer.

Quality aeration also gives your lawn more margin of error for minor over-fertilization or the over-seeding of trouble spots.

The difference fertilizing makes is not apparent when the living is easy for everyone’s grass. The tale is told in the tough times, when the heat and shallow roots of your neighbour’s grass has turned their lawn dormant while yours shrugs off the deep summer as verdant as ever.

The typical inorganic and organic lawn fertilizers are composed of ingredients which carry three primary chemicals. The first chemical is nitrogen, marked by the chemical notation (N) on packages of fertilizer. The other two commonly found “macronutrients” are phosphorus (P), and potassium (K). All pre-packaged fertilizers, whether organic or inorganic, use filler materials to assure even spreading and moisture absorption to aid in their break down.

In a complicated chemical process, the three primary chemicals combine with moisture to create dissolved acids that are useable by the grass and its nitrogen fixing microbes. The end results are grasses which grow deeper roots in search of the nutrients. Nitrogen promotes lush and green growth. Be warned though, it is easy to apply too much fertilizer and produce an effect called “nitrogen burn,” which results in off color patches or even dead spots in your lawn. Even the best “time release” products can result in nitrogen burn if you aren’t paying attention, especially if you mulch your grass clippings back into the lawn.