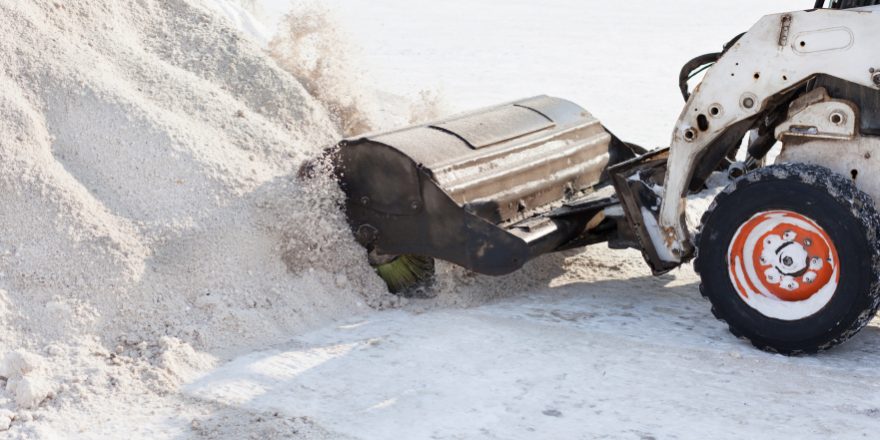 When snow piles up fresh, pristine and white, it looks clean enough to eat. And for the most part, it is!

But common airborne pollutants eventually fall to the ground, which snow begins to gather and absorb after just a short while. Even though it may still look clean, snow can actually be very, very dirty.

With three generations of experience with winter in Calgary in our back pockets, Mirage Landscaping has tackled some of the most intense snow removal jobs imaginable. But because we work year-round, and our commercial and personal properties are our responsibility throughout the year, we pay attention to the overall affects of our removal processes, and make sure that we pay as much attention to the environment as we do to our work.

Wherever you look in wintertime Alberta, you can see hot gases rising into the cold air. Whether from car tailpipes, the smoke stacks of industry and power generation, the tops of highrises where the buildings’ heat exhaust gases are expelled, any pollutants you are seeing evidence of eventually fall atop of the visible snow pack around the city. One of the dirty secrets of air pollution is that most of the contaminants are water soluble. When they fall upon the snow, they become concentrated within it.

Snow that falls on the street or parking lots also becomes contaminated from ground pollutants, mainly from both the vehicles themselves as well as the agents we all use to melt ice. The snow that lands near roadways or on the margins of parking lots becomes darkened “snirt” (snow+dirt), but any snow that is on the ground locally for more than a few days in these areas will be contaminated with traceable amounts of suspended solids, organic and inorganic chemicals, dissolved chlorides such as de-icers, heavy metals, and petroleum distillates. Even if it looks untouched, such snow would be nothing you’d ever want to eat.

As your premier landscaping design, maintenance, and snow removal firm in Calgary, Mirage Landscaping deals with contaminated snow all winter. In particular, we can handle the enormous snow loads that result from commercial parking lots all over the city. It’s vitally important for the safety of the province’s watersheds that the disposal of this snow be handled with the care it warrants.

Oh Where, Oh Where Did The Snow Dump Go?

Unfortunately, the City of Calgary has closed its three snow storage sites at Highfield/Bonnybrook, Spring Gardens and the Pumphouse to any private contractors due to concerns about space. Most of the snow dumps available for private use are located just outside of the city, and they adhere to all Alberta Environment regulations. But as we had record snowfall in December, without much relief in January, the snow dumps are filling up fast!

Next week we will provide a brief summary of where and how snow is supposed to be handled to ensure our water resources are protected.

Winter isn’t over yet, unfortunately! For commercial and personal snow removal services in Calgary, contact Mirage Landscaping. We have the experience necessary to get the job done right.