Know When to Cover Your Plants 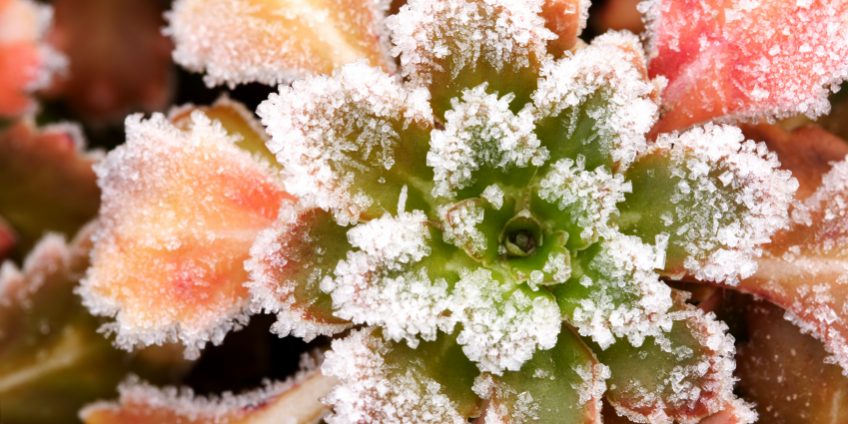 As sad as it is for us at Mirage Landscaping of Calgary to say so, summer is winding down. Though the autumnal equinox is not until September 23, Calgary is more than a kilometere above sea level, and historically sees a first frost by mid-month due to the altitude.

Whether that first frost is a “killing frost” depends largely upon two factors: 1) the type of plants you have outdoors this time of year, and, 2) the measures you are willing to take to prevent early fall frosts from dishing out their damage to your less hardy plants.

“Hardiness” is a term designating which plants will thrive in a Canadian locale, and more important, survive the winters here. Most of Calgary is composed of zones 3a and 3b, with the former being slightly harsher. It is hard to generalize about which hardiness zones lay in what part of the city because hills, dips in elevation, and the amount of windbreaks in the area can all create “microclimates.” If you are interested in trying to pinpoint your home or business, here is an interactive map.

Frost kills or damages a plant in three primary ways. First, when the mercury is hitting, zero, or 32F if you prefer, the moisture in the air will begin to precipitate in the form of dew. This dew will coat the leaves and perhaps even the interior of the plant with ice crystals. Secondly, even a light frost can freeze the plant’s cells themselves, impairing their function and causing a “die back” of the affected areas. Third, frost can attack the roots of the plant itself.

At Mirage Landscaping, Calgary’s full-service landscaping design, construction, and maintenance firm in Calgary, we love science, but it’s a lot easier to deal in common sense with the businesses and homeowners we serve. Rather that try to figure out the minutia of your microclimate, we prefer to handy and practical advice instead.

Hardiness by the Eyeball Test

Think about what fragile plants and tougher variants have in common and you will have ready clues to the general hardiness of your plantings. Of course your list should start with annuals. They are all going to die before winter is in force, as this is their nature. However, you can delay their date with destiny.

Perennials vary widely in their ability to deal with frosts. Tougher, woody stem and branch varieties such as shrubs and many types of berry producing plants endure frosts much better than softer stemmed fruit and vegetable producers do.

With over three generations of experience dealing with the autumnal weather of Calgary, we’re here to tell you that frost deaths can be postponed by the vigilant gardener so long as the days are staying warm. The first step is to avidly watch the forecasts. Your only notice of an actual frost may be a forecast that predicts only a chance of an overnight freeze.

The easiest anti-frost countermeasure is the application or reapplication of ground cover. The plants retain solar warmth from the daylight hours so the plant has an easier time dealing with dipping nighttime temperatures and ensuring any surface moisture near the plant stays liquid rather than form damaging ice crystals. We have detailed the use of ground cover before in our two-part series on mulch (part 1 and part 2, If you need a lot of ground cover in a hurry, contact Mirage Landscaping for a free quote.

The more extreme frost countermeasure involves making what amounts to “night covers” for your threatened plantings. With these you can disrupt the methods by which frost kills or damages susceptible plants.

Covers for your plants serve in the same way that blankets serve you. Through the use of a material like burlap or even old bed sheets, you can create a pocket of warmer air around the plant. It is important to remember to use air permeable materials for your cover as the plant is always transpiring, which will create condensation inside of plastic sheeting, which fall back onto the plant and freeze hard despite your best intentions.

Come morning, you simply take the covers off to expose the plant to the warming sun. You can effectively have a few more weeks of summer in your garden!