Lawn Care in Calgary By Mirage: The Agony of Ant Infestations 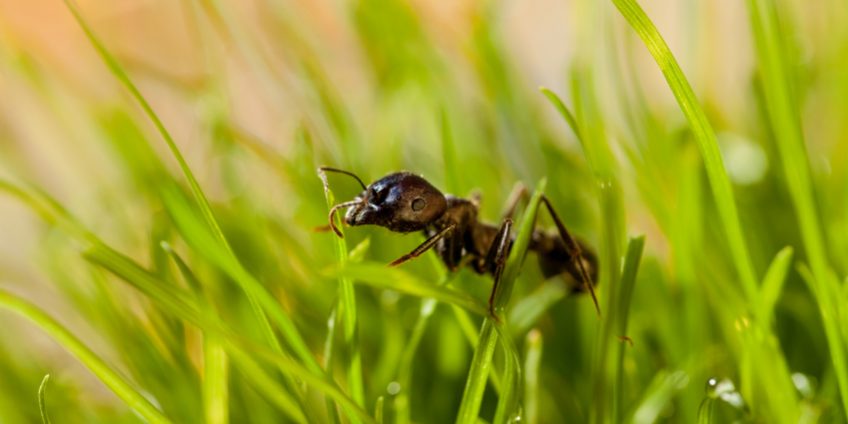 Ants. The very word is enough to make some people’s skin crawl. They’re everywhere, and they can not only ruin your barbecue, but they have a habit of ruining your landscaping, too.

Mirage Landscaping have been dealing with lawn care in Calgary for decades, and although they’re a pain, Alberta’s ants aren’t all bad.  Ants not only aerate the soil much in the way that earthworms do, but they also aggressively patrol it, looking for their kinds of food stuff. Many ants will even attack the larval forms of other insects that feed off of your plants, such as caterpillars.

Compared to their life in the “wilderness” of a seldom-visited corner of your yard, living a literal mandible to larva existence, the indoor retreat of your home represents a jackpot of refined sweets and easy access to water, all there for the taking. Thankfully, only destructive species, like carpenter ants, will set up permanently within your home. If you see black ants invading your kitchen or bathroom, you are really seeing the trails of scouts and workers who actually live outside.

Whenever you encounter ants in a place you don’t want them to be in, you have two basic strategies available to you—kill them off or drive them away.

Whatever strategy you choose, some ants are going to die.

To get rid of a colony, you need to take out the ant queen and kill the larval generation that would succeed her.

In an attempt to drive away a colony – as in, move them to another location – or else poison them into submission.

When driving away a colony, the goal is to make the environment so inhospitable to easy ant living, that the nest carries off the queen and her brood to a new locale. The attraction to driving ants away is that such approaches require no chemicals to accomplish, and are thus safe for children, pets, and organic gardening.

Either way, you have to locate the nest…the part of the ant hill you can see that just reaches the surface. Many common ant species can create nests up to ten feet deep if the water table allows it.

One choice is to apply boiling or near boiling water to an ant hill. It’s effective, but could scald the roots of any nearby plants too. The other problem is that such attacks only destroy the entrance of the nest and will not likely cause an evacuation.

Another water-based method is to penetrate the nest with a root soaker and flood parts of it internally. This can be effective in forcing a move. Ants do not deal well with loose and dampened soils, and however the calculation is made, continual repair of the nest can be deemed so high in cost that the colony abandons the site.

From DYI store pesticides to home brews, most ant killing strategies are the same. The majority select an attractive bait that the ants will carry in by themselves, thereby disrupting the food cycle of the colony.

Some people will tell you that by spreading corn meal or grits, you will get ants to eat these foods and when the ants drink, they will swell up and die as the food expands. These strategies misunderstand how ants eat. Mature ants cannot eat solids. They instead bring solid foods to the larvae, who make secretions that the mature ants drink. Thus, spreading grits or corn meal is effortlessly feeding the colony, not killing it.

The most famous tabletop remedy is to mix boric acid with sugar water to create a poisonous drink. Such compounds will kill ants, but if applied too weakly or inconsistently, ants will build tolerance to it. Boric acid is also awful for plants if your bait trap spills.

Beyond these tactics, store-bought single active ingredient poisons can lose effect over time. Mirage Landscaping of Calgary has an Alberta certification on insecticides. If you need ants disposed of, contact us for a free quote.

Mirage Landscaping can also deal with tree boring beetles, mosquitoes, and other pests.