Tornadoes in Alberta Are More Common Than You Think 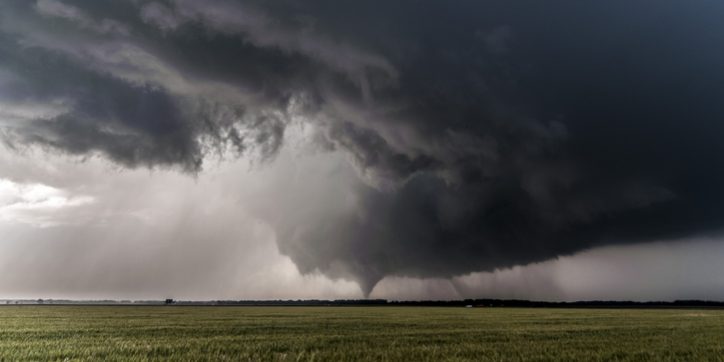 So far this summer there have been 10 tornadoes recorded in Alberta, with four touching down on a single day at the beginning of July. The affected areas were near the towns of Keoma, Acme, Trochu, and Brooks. The most recent tornado was on July 12 near Nanton, with winds reaching up to 150 kilometres per hour.

On average, Canada has about 80 confirmed and unconfirmed tornadoes touch down in a single year, with the majority happening in Southern Ontario, the southern prairies, and southern Quebec. This country has the second-most tornadoes a year –behind the U.S.  Ontario, Alberta, Manitoba and Saskatchewan all see between 8 and 14 tornadoes per season, with Alberta recording higher numbers and higher intensities than usual in the last five years. May through September is technically tornado season, which frequencies reaching their highest from mid-June to early August.

Generally, tornadoes touch down in more rural areas, however it is not uncommon for them to come very near to or even enter the city. In 2017 a tornado was reported near the Calgary Airport, and in 2015 both Airdrie and Cochrane reported twisters in the area. In 2016, a tornado did actually touch down in Calgary, however it was the lowest grade and did not cause much damage.

Alberta just celebrated the 20th anniversary of its second-worst tornado in recent history, which happened on July 14, 2000. When a twister ravaged its way through the Green Acres Resort Campground, 12 people were killed and 100 others injured. The worst tornado in Alberta history happened on July 31, 1987, in the Edmonton area and resulted in 27 people losing their lives. In that incident, the tornado stayed on the ground for an hour and ripped through the eastern parts of the city and parts of Strathcona County. More than 300 people were injured, 300 homes were destroyed, and there was more than $332 million in property damage strewn across four major disaster sites. The tornado reached an F4 status – the second most intense – with wind speeds reaching more than 300 kilometres per hour.

How Do Tornadoes Start?

Tornadoes start with thunderstorms and require warm, moist air and cool, dry air to meet and then destabilize the atmosphere. As the thunderstorm is occurring in a cumulonimbus cloud, a sudden change in wind direction and wind speeds at a high altitude causes the air in the cloud to begin to spin horizontally. Then, rising air from the ground has to basically push the horizontally swirling air upwards to “tip” it over, which then causes it to swirl vertically.

More interesting facts about tornadoes in Alberta include:

What Do I Do if There is a Tornado Coming?

Tornadoes in Alberta can range from the mild to the extreme, but if you ever hear a warning the actions are always the same. First off, given the crazy weather we experience almost weekly, every Albertan should download the Alberta Emergency Alert app, which will send an alert to your phone or computer when there is a potential risk in the area.

The Government of Alberta provides these tips for staying safe during a tornado or any weather incident involving extreme winds:

If you are in a vehicle when a tornado or extreme wind warning is issued, pull over and find shelter immediately. Vehicles are not safe places to be in a tornado.

If you can’t find proper shelter and the tornado is close by:

If you are in a rural area and see the tornado in the distance, you may be able to avoid it by driving at a right angle to the path it appears to be taking. This Fact Sheet provides more information about tornadoes and high winds in Alberta.

As landscapers in Calgary we have seen the devastation caused to yards and commercial properties by high winds. A way to help keep the wreckage down is to ensure your yard is properly pruned. This will rid trees of branches that may fall and damage roofs and buildings, bring down power lines, and harm the tree.

Mirage Landscaping provides complete landscape maintenance services includes mowing, fertilizing, spraying for dandelions, edging, weeding, and litter removal. Our landscape construction services include irrigation service and maintenance, and patio and retaining wall construction, as well as sod and tree installation. We specialize in serving the southeast area of Calgary, including the communities of:

Noticing puddles in your yard? You may have a drainage issue
April 26, 2022

The benefits of a good power rake in the spring
April 8, 2022