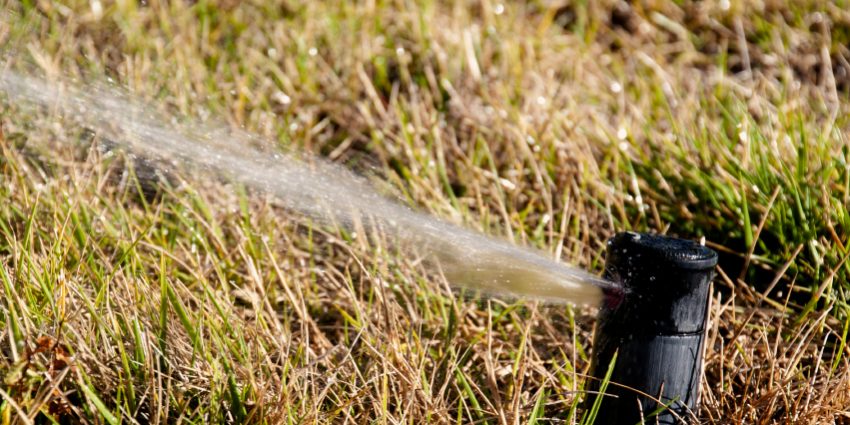 After our unusual summer of raining and flooding it’s hard to believe that winter weather is just a couple of months away, more or less. If you are the owner of a residential or commercial underground sprinkler system, it’s soon time to decide whether to drain, or “blowout” your buried irrigation system.

Some of you may ask, “Why should I bear the expense of completely draining my irrigation system? I open the drain valve every season.”

The answer is simple — to spare yourself possible greater future expense. Opening a drain valve may be ok in some circumstances, having professionals, such as ourselves here at Mirage Landscaping Company  in Calgary, blow out your system, is active preventative maintenance.

Calgary Landscaping: The Importance of Draining

If your underground sprinkler system was installed correctly, it was trenched in at the correct depth below the expected average frost line, and with a downhill bias built in so that opening a drain valve will indeed drain most of the water in it. However, even the best installation can have pipes that settle, junctions between zones that don’t drain as well as they should, and all systems have control and zone valves, sprinkler heads and stem pipes, as well as back flow devices that may trap water when only passively drained. As your system gets older, settling into the soil under the summer weight of water may bow plastic pipes deeper than intended, or retracting sprinkler heads may drag in contaminants that trap water. Passive draining cannot deal with inadvertently trapped water. Only pressurizing your system with the capacity of a commercial grade air compressor can possibly force the vast majority of trapped water from an underground sprinkler installation.

Even that sounds simple, doesn’t it? Just blast some air into the system, how hard can it be? In our over three generations of experience in caring for Calgary area commercial and residential landscaping clients, we’ve been called upon to repair sprinkler systems that were “blown” incorrectly. As each individual case is different, we can’t get into specifics about who did what wrong, and why, but many of the do-it-yourself mistakes when winterizing underground sprinkler systems stem from two basic facts: liquids, like water, cannot be compressed, while gases, like air, certainly can be. Long story short, you can’t just stick an air hose into an underground sprinkler system and “crank ‘er up!” If you don’t know what you are doing, it’s more expensive to risk the components of your sprinkler system than it is to call in a professional to do the job correctly.

The danger, in repair expenses, of having water freeze within your underground sprinkler system should be self-evident. Burst pipes come spring will not only undermine your landscaping, they will undermine your bottom line or household budget too. Just one ice blockage within your sprinkler system can wreak untold damage to your system, the worst of it being that you can’t see the extent of the problem until its either bubbling up through your lawn, or sprinklers, or perhaps even entire zones, aren’t delivering water.

If you have extensive micro-irrigation or a complicated terrain layout in your irrigation system, it is even more imperative to get your entire irrigation system prepared for winter through a complete water purging. You need to have someone not only drain, but flush out the entirety of your underground irrigation system. You simply can’t leave it to passive draining and blind luck that you won’t get ice expansion burst damage or even ice blockages that cripple the system when it is first charged in the spring.

Calgary Landscaping Companies: Mirage Will Drain For You!

Don’t leave the reliability and proper functioning of your underground sprinkler system to chance. Take a proactive step and not only drain it, but call us for a free quote to thoroughly prepare it for winter. The money you stand to save, even over an insurance deductible payment should your frozen system one day require extensive repairs, could easily amount to hundreds of dollars.