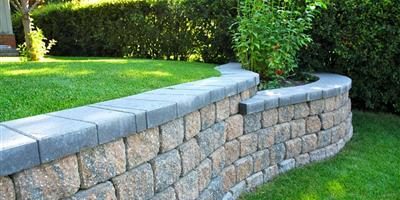 Thus far this winter we’ve seen some pretty extreme weather in Calgary. At Mirage Landscaping, your premier landscaping design and snow removal company, we know that this isn’t the time of year you would usually think about your retaining wall, but the winter is when that wall is at its most vulnerable. As you know, our typical winter weather pattern is not one built upon repeated flows of Arctic air pushing into the area and keeping everything in a extended deep freeze. Instead, we usually have weather more akin to this week, where part of it was freezing and part of it was above zero.

Our regular pattern of a series of monthly freeze/thaw cycles in Calgary poses two tough, and related, problems for your retaining wall. Also, as is usually the case, the bigger your wall, the earlier these problems have to be detected because the consequences of a failed larger retaining wall are far more serious.

The Direct Attack of the Winter Weather Upon Your Wall

Unless we here at Mirage Landscaping built it ourselves we can’t know if the contractor used the same meticulous standards that we have adopted, including consulting with an engineer when necessary. If that was the case, depending on its size, the retaining wall should have been constructed to either manage moisture around it, or get rid of it through drains built into its structure. Good management of water is crucial to a retaining wall standing firm for decades. Each litre of water weighs a kilogram. If you prefer to think in terms of English measurements, each gallon of water weighs eight and a third pounds.

Your wall was mathematically designed for an earthen weight load plus some more structural margin for safety. The entire reason that retaining walls are designed is to divert water over their tops, or through themselves with drains, is because it is difficult, if not impossible, to determine how much water there may eventually be, the wall should be capable of holding in place regardless.

The weight of water brings us to our freeze/thaw cycle in Calgary. In many retaining wall designs without integral drainage built into them, a part of the water management is left for the surrounding plantings to perform. Of course, plants are dormant in the winter and not doing their part. What this means is that if the snow on top of the area being retained by the wall suddenly melts, the soil behind the wall can become saturated. The short days may cause water to refreeze before it is effectively drained off, causing small ice dams either where the water drains away from the wall or within the drains that run through it. If subsequent melt water gets trapped behind the wall, it may not have been either designed or constructed to withstand the added weight and could shift, settle, or even catastrophically blow out.

Attack of the Salts

Even if your retaining wall is draining beautifully in the winter doesn’t mean it is free from another winter threat…de-icing agents. Retaining wall blocks typically used in our Calgary landscaping designs are specifically engineered to resist the freeze/thaw cycle. The way this is accomplished is by making the blocks less porous, to be better able to resist the infiltration of water, which when frozen, would expand and damage the block through micro-fracturing.

Though less porous, these blocks are not protected against deicing agents. Whatever else makes up their composition, all current de-icing salts contain chloride. When made into a solution with water, this chloride compound acts like a weak, but relentless, acid attack upon the brick, literally dissolving it on the molecular level. The signs of chloride damage being a problem for your wall will take the form of spalling, or accelerated erosion.

Though we wouldn’t hesitate to give you a free quote for the emergency winter repair of a retaining wall, short of a total failure of a section, it can probably wait for better weather. Especially when it comes to older retaining walls, with decades of cumulative winter damage heaped upon it, the only reasonable course of action may be to tear down the existing wall and replace it with a new one built to our exacting standards of quality.

Whether you need a new retaining wall or the rescue of an older one, make Mirage Landscaping in Calgary your first call.